It was established at that time with Cross River State Edict No. 13 of 1975. So, ever since, the water board has remained an autonomous water agency operating the old Calabar scheme. The old CALCEMCO in Essien Town, Calabar, is where the old water schemes were located. Cross River State Water Board Ltd is the water utility of the State, responsible for piped water supply services in the entire Cross River State. There are water supply schemes in Ugep-Ediba, Itigidi, Obubra, Ikom, Obudu and Ogoja, commissioned in the early 1960’s by the late Colonel Onogu when he was in power during the Biafran regime. So, those systems have been in operation in their various capacities and have been properly managed up to the late 80’s, when it was realized that the systems were old and demand had increased tremendously due to populations increase. That realization led to the quest for reform for infrastructure rehabilitation and expansion. The organizational structure of the present day CRSWBL is presented in figure below. 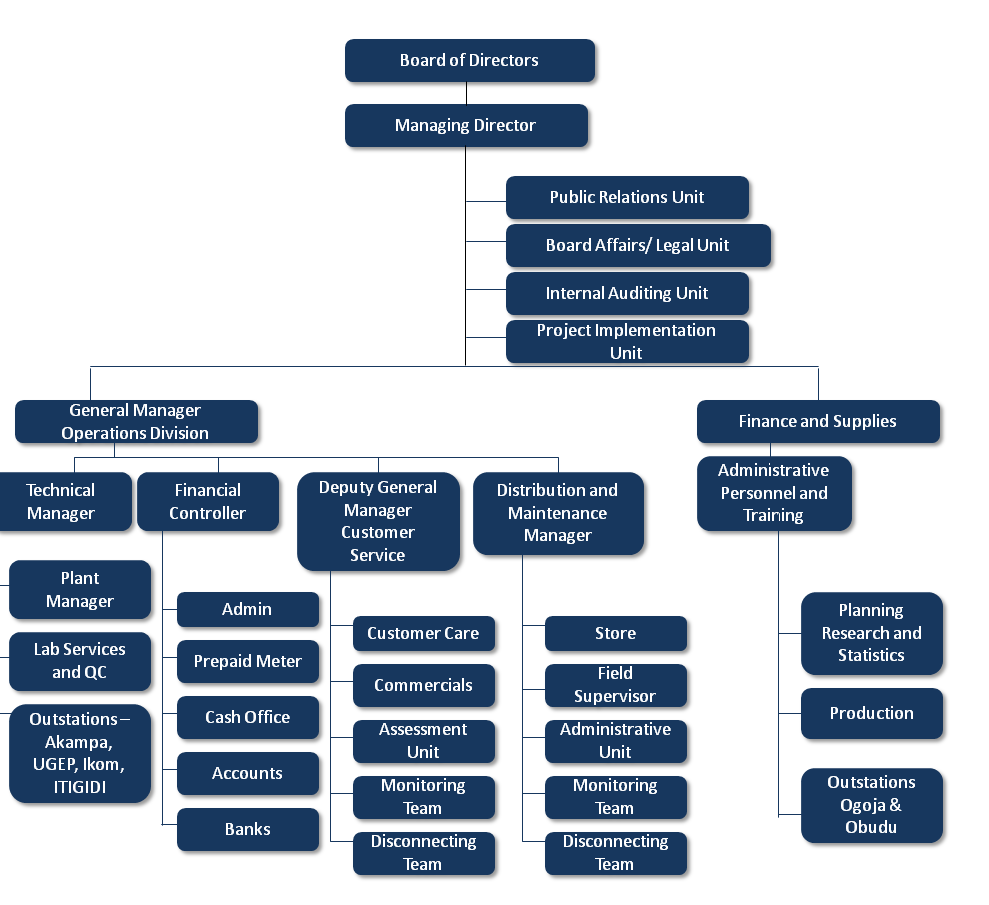 The Objectives of the reform project in Cross River State are similar to those of other States in Nigeria, where the Urban Water Sector Reforms are being implemented. The objectives are:

In order to realise the Project objective, four project components were identified for investment:

Funds were provided for CRSWBL to carry out critical rehabilitation and expansion projects to restore existing infrastructure, towards the improvement of water services to the populace. Funds were also provided for the construction of entirely new water supply infrastructure, with the overall objective of having all water supply systems in the State operating at installed capacity. Support for the purchase of essential vehicles and specialized rolling stock were also included, as well as production and installation of meters to provide vital operational information Key rehabilitation and expansion projects under the NUWSRP include:

There is an ongoing procurement activity for the finalisation of the Performance Based and commercial Assistance Assignment which will procure the services of a PPP service provider that will be acceptable to all stakeholders in the State.

The Cross River State Water Sector has a Water Policy in place, which provides information on the water sector policy direction of the State Government. A draft water sector law has been developed by the State water sector actors, and the State Executive Council is reviewing the draft law before onward transmission to the legislatures.

Due to the PPP structure in the CRSWBL, the operations of the utility has been greatly optimized and improved for service delivery. From the organizational structure above, the operations division of the utility is managed by the PPP partner, ORTECH, who’s responsible for the smooth operation of water production, transmission, distribution, metering, billing, and collection.

The CRSWBL has taken full advantage of the NUWSRP in Cross River State to improve its infrastructure assets and operational framework. The use of PPP in the management of operations has been tested in the utility, with successes recorded and lessons learned. The African Development Bank, the World Bank, and the AFD are all key financiers of the reform projects in Cross River State, with each of them focusing on specific projects. The CRSWBL has also restructured its operations and built the capacity of its personnel, through the opportunities provided by the reform programme.