Lagos State Water Corporation (LSWC) is regarded as the largest water utility in Africa, with a target supply population of about 20 million people. Pipe borne water supply in Lagos dates back to 1910, and the first official commissioning of water supply project was in 1915. Despite numerous expansion and modernization projects up till 1991, pipe borne water supply was still insufficient to meet the demand in Lagos. Supply from Iju water works (the premier water works in Lagos) and Adiyan water works was hampered by damaged and outdated production machineries that require investment for rehabilitation. Low and intermittent power supply and damaged/broken pipes also impede supply services by the corporation. The three major surface water schemes are presented below;

LSWC has worked with the government (State and Federal) and development partners to improve services to the populace, through infrastructure development, policy and regulatory reforms, and organizational restructuring. The organizational structure of the corporation is presented in the figure below. 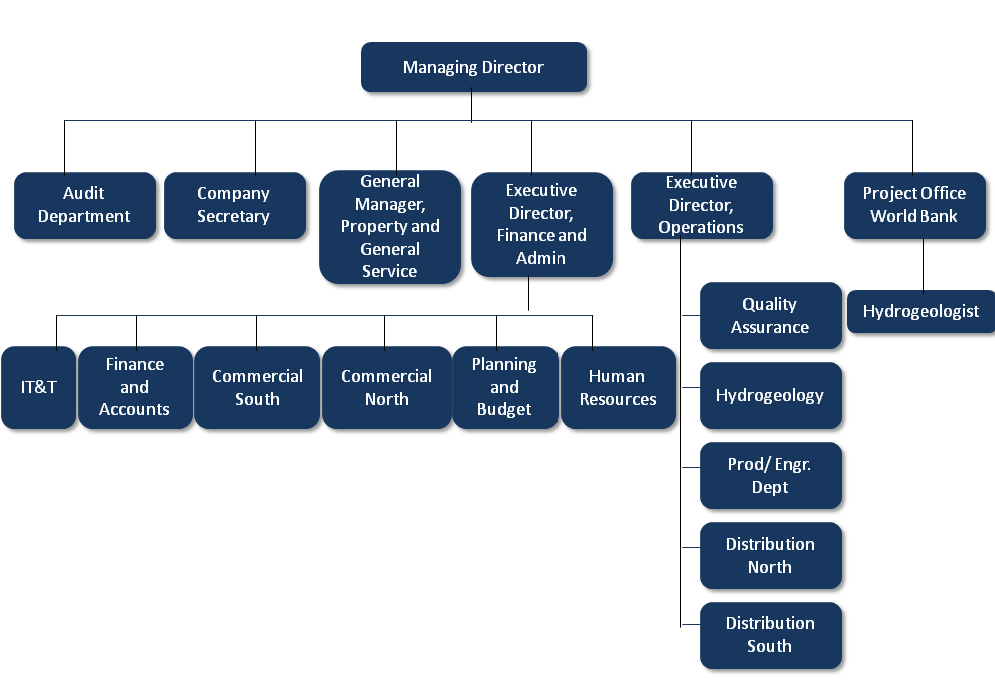 The Federal Government of Nigeria, working with development partners through the Federal Ministry of Water Resources, has provided different types of support and investment towards improving water services in Nigeria. The National Urban Water Sector Reform Programme (NUWSRP) is one of the investment and reform mechanisms in the water sector, and the Lagos State Water Corporation is one of the beneficiary States of the 2nd phase of the National Urban Water Sector Reform Programme.

Notwithstanding the investment in supply expansion, plant rehabilitation, and operations improvement at the LSWC, there was still a huge supply gap to be resolved. Box 6 below is a summary of the situation in the utility before the NUWSRP implementation in the State.

The situation of public water supply services in Lagos justified the need for reform in the water sector of the State, and improvement in water production and supply infrastructure was a priority area for the reform of the utility. The operational structural improvement and human capacity building were other areas of importance that required significant reforming. Key activities and outputs of the reform programme in Lagos are as follows;

The following schemes were either rehabilitated or newly constructed during the reform programme;

Network Expansion: Supply network expansion was carried out to increase service coverage in Lagos. The supply network was increased from 2,075KM to 2,411KM of pipe systems. Key among the pipeline expansion and rehabilitation projects are;

Most utilities in Nigeria rely on public power supply for their operations, and considering the poor state of power in the country, all the utilities in Nigeria resort to the use of power generators. The cost of running generators in some cases is as high as 40% of operational costs, due to the need for diesel fuel required to run the generating plants. Lagos State Water Corporation, with the support of the Lagos State Government, took a bold step to resolve their power supply challenges. The Government of the State, through a Power Supply Agreement with a private company, has significantly increased the capacity utilization of the Iju water works, thereby improving the supply to the public. The Akute Power project is a 12.15MW Independent Power Plant (IPP), solely dedicated to powering the Akute and Iju treatment plants. Box 8 presents a summary of the benefits of the IPP.

With the rehabilitation of Water works and extension of supply mains, production plant capacities have been increased, leading to more water made available to the populace in Lagos. Some areas that lacked access to water now have potable water supply from the LSWC. Worthy of mention are areas like Gbagada phase 1 & 2, Iponri, Oworonsoki, parts of Itire, Ilubirin, Parkview, and Osborne. These had no public supply before the reform programme, but can now boast of water supply from the LSWC.

On the Lagos main land, some areas in Ikeja GRA, Shomolu, Ilupeju, and surulere were cut off from public supply for many years. The reform programme supported the restoration of supply to these areas. Table 4 and figure 10 below present the key outcome indicators for the LSWC. Unfortunately, there was no adequate baseline information for the LSWC data received. However, the most important information for the corporation is the increase in production, which has led to an increase in availability of water to the public. 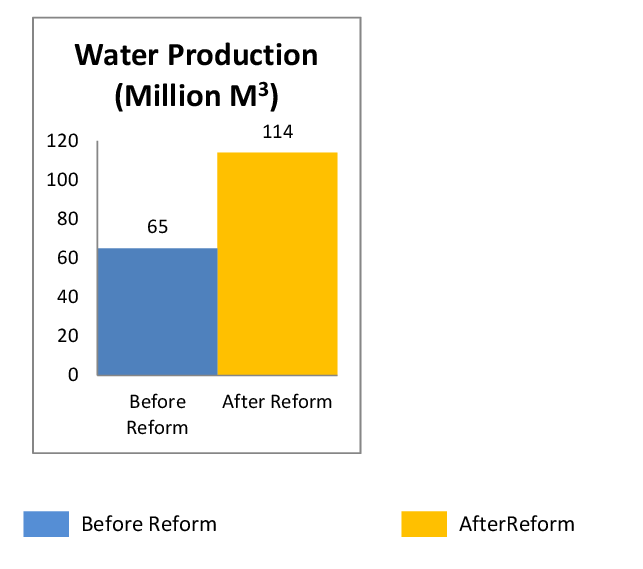 Increase in Water Production in Lagos

Human capacity development is also paramount to sustainability of the reform programme, and the LSWC has invested significantly in Human capacity building. Several training programmes have been completed across all departments of the corporation, and more are ongoing and scheduled for the near future.

The operational structure and customer care systems of the LSWC were reviewed and a number of changes made to improve services to the public. Significant among the changes made is the establishment of a Civil Society Organisations (CSO) desk in the utility offices, and the establishment 12 helpdesks in the area offices of the utility. 34 vehicles were procured by the State Government to support operations management of the LSWC. Setting up of these structures has led to;

A number of planning and framework documents were developed by the LSWC as part of the reform programme in the water sector of the State.

A document produced to provide a picture of the direction the LSWC is heading, towards a sustainable reform of the utility. The master plan for the Lagos water sector (2010 to 2020) takes into cognizance the projected population increase to the target year of 2020. The projection also recognizes the demand – supply gap, and identified measures to adequately bridge the gap towards the target year.

The document is a summary of the water sector institutional responsibilities for the three tiers of government in Nigeria. The responsibilities highlighted in the document include those of the Federal Ministry of Water resource and the River Basin Development Authorities. The role of State utilities is also specifically mentioned, with respect to water supply in the States.

A pamphlet that contains a list of the contact information of the managers in the different localities in Lagos State. It is specifically designed for customers, to aid the ease of channeling of complaints and other issues that may require the involvement of the LSWC.

Some laudable achievements have been recorded in the Lagos State Urban Water Sector Reform Programme, and without doubts, more successes will be achieved. However, some challenges were identified during the implementation of the reform programme. For the smooth continuation of the reforms in the water sector of the State, the identified challenges will need to be resolved. The following sections describe the key challenges identified;

The reform programme in Lagos State has led to the rehabilitation of four (4) major water production plants (Adiyan, Iju, Isashi and Akute) and nine (9) mini water works (Ikeja, Alausa, Onikan, Isheri, Iponri, Aguda, Dolphin, Alexandra, Lekki) responsible for the increase in water production from the water plants in Lagos. Network rehabilitation from two (2) of eleven (11) service areas increased the accessibility to public water supply to the people of Lagos State. Revenue collection remains low due to the processes of billing and collection by the utility, and this may affect production and supply in the medium to long term.