The development of water supply infrastructure in Enugu metropolis started before the political independence of Nigeria in 1960 when the city was the Regional Headquarters of the former Eastern Region of Nigeria. From 1967, many States were created out of the Eastern Region, and Enugu retained its role as the administrative headquarters of the former East Central States.

In 2006 there were three water production plants supply water to Enugu city, Ajalli, Oji, and Iva-Valley water plants. The average daily capacity utilization of the three water production plants was estimated as 40% of their total installed capacity, which is a gross underutilization of the water supply facilities. Similarly, the functional borehole sources for water supply to Nsukka were grossly inadequate due to the increasing demand for potable water supply by a growing Nsukka urban population.

There was therefore an urgent need for the rehabilitation and upgrade of the three water production plants of Ajalli, Oji, and lva-Valley, to their design capacities. It was also necessary for the provision of additional water supply sources for Nsukka, as well as the rehabilitation and upgrade of other system components such as pumping stations, storage facilities, and pipe network. The present organizational structure of the Enugu State Water Corporation (ESWC) is presented below 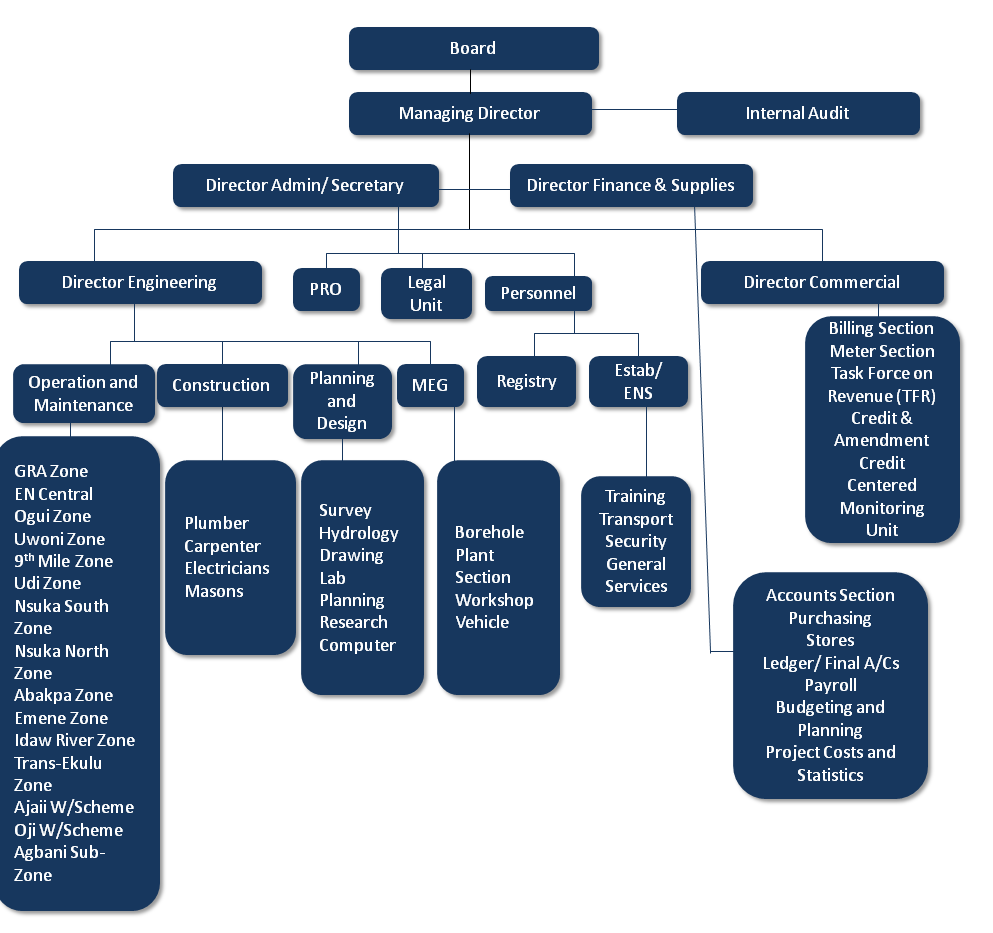 Enugu State, along with Ogun and Kaduna States, participated in the National Urban Water Sector Reform Programme (NUWSRP) as the pioneer states, generally referred to as the First National Urban Water Sector Reform Project. The project was designed, conceived and prepared to address the lack of investment in the water sector through rehabilitation of water assets and financial reliability of the State utility.

Before 2004 when the urban water sector reform was launched in Enugu State, the water supply infrastructure in the State was in a state of comatose. Faced with these challenges at inception, the Enugu State Government played its role in full to show the State’s commitment to the NUWSRP, and supported the Enugu State Water Corporation in concretizing participation in the 1st National Urban Water Sector Reform Project (1st NUWSRP) — December 2006- September 2013, funded by the World Bank to the tune of USD26.56 million.

Under the project, substantial rehabilitation works have been carried out at the Ajalli, Oji and Iva-Valley water schemes, restoring Ajalli and Iva-Valley schemes to 80% of design capacities. Rehabilitation of the Oji scheme was yet to be completed as at the time of reporting. The project also had four (4) new water boreholes drilled in Nsukka, with combined production capacity of 400m3/day, in addition to the rehabilitation of existing electromechanical equipment from 10% to 80% of design capacity. There was also the supply and installation of new 350KVA generator and 500KVA transformer for the Nsukka water production plant.

In Enugu metropolis and Nsukka urban, the old distribution trunk mains and secondary pipelines received substantial rehabilitation and extension improvements under the 1st NUWSRP. A total of 98 kilometers of pipelines of various sizes were rehabilitated or extended. 3,500 Universal prepaid meters were procured for Enugu under the New Haven pilot metering addendum contract, with 1300 installed together with a meter management system (the system vending software). And another 1000 prepaid meters have been delivered under the project, for installation in Nsukka.

The three water production plants- Ajalli, Oji augmentation, and Iva-Valley were considered adequate to supply the water needs of Enugu metropolis on full capacity utilization up to 2014. However, in 2006 the average daily capacity utilization of the three plants was put at 40% of their total installed capacity, indicating gross underutilization. Also, the functional boreholes source of water supply to Nsukka was grossly inadequate for potable water supply to the growing population of Nsukka urban.

Effectiveness of the Water utility

The general effectiveness of the utility before the reform was generally below average, with less than half of the population being served, and an even lower billing and collection rate. The utility was also over staffed and the water supply assets underutilized.

Consumer perception of the utility

Consumer perception was poor, and people did not see the utility as a reliable government agency. Hence, most residents resulted to finding other means of getting water, example, from informal water vendors.

The ESWC presently operates three (3) water production plants for Enugu, and one (1) scheme in Nsukka, with about 450 kilometers of water transmission and distribution pipelines.

These schemes and their installed capacities are presented below:

Key indicators for the ENSWC

Recorded Increase in Key Indicators at the ENSWC

A Draft Water Policy document has been developed with the support of the NUWSRP and other key water sector stakeholders in the state. Also under development is a State water law that will establish a sector regulatory body for the regulation of actors in the sector. The State Executive Council will present the Water Bill as an executive bill to the state legislature.

Staff of the ENSWC have been trained locally and internationally in various areas of specialization in water supply services and management. Training on the computerization of the commercial and financial operations of the utility was also conducted for the relevant staff of the utility. The utility has also focused capacity improvement in the area of Public Private Partnership (PPP), to prepare the staff for the planned application of PPP approach for operations management.

Prior to the commencement of the reform programme in Enugu State, Enugu State Water Corporation had less than 2000 active House Connections as a result of dilapidated water supply pipe network. The active House Connections were increased to 9,862 in 2014, and the ENSWC is vigorously pursuing the target to activate additional 8,321 active connections through improved water production, pipe network rehabilitation and expansion. The revenue level of the ENSWC has tripled within the last eight years, from about N4 Million in 2007, to an average of N15 Million a month in 2015.

Furtherance to the gains of the 1st NUWSRP in Enugu, the ENSWC participated in various IBNET and APISEC workshops, and steps are being taken to internalize the benchmarking and performance management culture. Also, under the Water Operators’ Partnerships-Africa Initiative, the ENSWC is partnering with the Nairobi City Water & Sewerage Company (NCWSC) Ltd, Kenya, in sharing performance improvement experiences. The outcome of the first exchange of diagnostic visits between the two Utilities has led to the development of a Short Term Performance Improvement Plan for the ENSWC. The ENSWC has applied for the French Development Agency (AFD) funding facility, towards improvement of water supply in Enugu State. The facility when finally granted shall be applied substantially in the area of institutional development enhancement.

The reform programme in Enugu State has supported the successful rehabilitation and expansion of physical water supply infrastructure, leading to improvements in water supply services in Enugu metropolis and Nsukka urban. The ENSWC has embraced PPP as a good approach to water supply operations, and working with the State Ministry of Water Resources to enter into a PPP contract for the management of the utility operations. Enugu State was part of the first NUWSRP, with significant investment in water sector made by the World Bank, which led to the State Government framework improving the investment made to the development of water supply infrastructure in the State.